Change the perspective.
Explore by stakeholder

The main operating figures of the Italgas Group in 2020 are shown below.

Metering investments (€ 120.8 million, -32.7% compared to the same period of 2019) refer primarily to the final stage of the plan to replace traditional meters with smart meters, which is estimated to be completed within the early months of 2021,
ahead of the new Authority provisions.

Excluding the affiliates, the total number of active meters is 7.595 million (7.573 million as of 31 December 2019). The legislation on remote meter reading (Resolution No. 631/2013/R/gas as amended) defines the objectives, differentiated by calibre, of electronic meters put into service. These objectives have been modified on multiple occasions over time (Resolution ARG/gas no. 155/08 and Resolution no. 669/2018/R/gas), most recently by Resolution no. 501/2020/R/gas that deferred achievement of the minimum replacement target for companies with over 200 thousand clients by one year, taking into account the difficulties of replacement caused by the COVID-19 health emergency26.

SITUATION AT YEAR END ON TENDERS AND CONTRACTS AWARDED

The following figure shows the presence of the Italgas Group in Italy28.

As of 31 December 2020, as a result of the regulatory framework envisaging the award of gas distribution services through local tenders (and not by individual municipality), 34 tender notices have been published, of which only fourteen sent to the Authority, as envisaged in Ministerial Decree no. 226/2011. 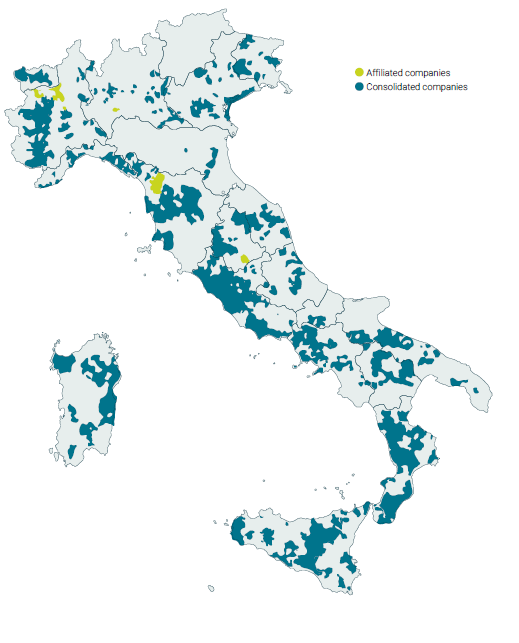 With regard to the award of the natural Gas distribution serviceService of transporting natural gas through networks of local methane pipelines from one or more delivery points to redelivery points, generally at low pressure and in urban areas, for delivery to end users. in the “Valle d’Aosta” area, two other operators have requested annulment of the final award to Italgas Reti. With ruling no. 39/2020 of 14 July 2020, published on 1 September 2020, the Regional Administrative Court of Valle d’Aosta rejected the appeal filed by one of the other operators participating in the tender procedure for the annulment of the decision awarding the tender to Italgas Reti. With an appeal served on 2 September 2020, the operator placed third in the tender for the Aosta ATEMMinimum Geographical Areas (ATEMs) for conducting tenders and assigning the gas distribution service, calculated as 177 pursuant to the definition of Article 1 of the Ministerial Decree of 19 January 2011. The Municipalities belonging to reinstated before the Regional Administrative Court of Lombardy the original appeal filed before the Regional Administrative Court of Aosta, aimed at obtaining annulment of the final awarding of the tender to Italgas Reti. Italgas Reti filed an appearance, filing a cross-appeal against the failure to exclude this operator. The outcome of the hearing of 24 February 2021 is currently pending.

On 30 November 2020, the delivery of plants to the Council of Castel San Giorgio was signed; this had been officially awarded to Italgas Reti on 21 August 2020.

On 25 July 2019, Publiservizi S.p.A. served a summons on Italgas, alleging violation of a shareholders’ agreement entered into by Italgas, Publiservizi S.p.A. and other Municipalities holding stakes in Toscana Energia S.p.A. on 28 June 2018. The first hearing, held on 14 January 2020 before the Court of Florence, was adjourned until 6 May 2020. Italgas, which entered an appearance within the legal term, raised all the objections required to prove that the counterparty’s claims were groundless. The parties are exchanging briefs in which Italgas has filed further documents to support its objections and defence and has formulated various preliminary statements. The hearing for the discussion of the preliminary requests was adjourned due to the ongoing health emergency, to 25 November 2020 and, thereafter, to 28 April 2021.

With reference to the dispute with the Municipality of Rome concerning the implementation of the Business Plan, in Order no. 3834/2020 published on 19 June 2020, the Council of State upheld the precautionary appeal filed by Italgas Reti, suspending the effects of the ruling in which the Municipality of Rome requested the payment of penalties by Italgas Reti, until the decision on the matter.

On 5 July 2020, Italgas Reti filed an appeal before the Regional Administrative Court of Lazio, requesting that the Municipality of Rome be ordered to pay compensation for non-fulfilment of the concession contract entered into on 20 November 2012 for the public methane Gas distribution serviceService of transporting natural gas through networks of local methane pipelines from one or more delivery points to redelivery points, generally at low pressure and in urban areas, for delivery to end users.. The setting of a date for the hearing by the Regional Administrative Court of Lazio is currently pending.

On 18 November 2019, the Lombardy Regional Administrative Court, in Ruling no. 2430/2019, upheld the appeals filed by Italgas Reti on various grounds against: i) Resolution no. 98/2016 for the part relating to the recalculation of the Company’s reference tariffs for the years 2009-2014; ii) Resolution no. 99/2016 relating to the 2015 tariffs and iii) Resolution no. 494/2018 for the part relating to the non-recognition of the extra-remuneration of the investments made by the Company in the Municipality of Rome, with reference to the years 2009 and 2010. ARERAThe Italian Regulatory Authority for Energy, Networks and Environment (ARERA) is an independent body set up by Law no. 481 of 14 November 1995 to protect the interests of consumers and promote competition, efficiency and appealed against this last decision, with notice served on 11 February 2020 and filed on 13 February 2020. The Company entered an appearance within the legal term. The discussion hearing has not yet been scheduled.

In Ruling no. 28249 of 27 May 2020, published on 8 June 2020, the Antitrust Authority decided to launch an investigation to verify whether Italgas Reti, the current operator of the Gas distribution serviceService of transporting natural gas through networks of local methane pipelines from one or more delivery points to redelivery points, generally at low pressure and in urban areas, for delivery to end users. in several municipalities in the Province of Venice, has abused its dominant position as exclusive concessionaire of the service in order to significantly inhibit or delay the planned competitive procedure for assigning the service in the minimum territorial area including such municipalities (ATEMMinimum Geographical Areas (ATEMs) for conducting tenders and assigning the gas distribution service, calculated as 177 pursuant to the definition of Article 1 of the Ministerial Decree of 19 January 2011. The Municipalities belonging to VENICE 1). The company undertook to provide the Antitrust Authority with the necessary clarifications. On 1 October 2020, Italgas Reti filed a set of commitments. The Antitrust Authority approved the publication of these with Order no. 28371 of 20 October 2020. Therefore, on that date, the Italian Competition Authority (AGCM) admitted the commitments for the market test, setting the deadline for submitting comments at 20 November 2020. Italgas Reti then had the opportunity to examine the comments received and to submit an integrated commitment proposal on 21 December 2020 in the light of the feedback received.

In Ruling no. 197/2020 of 17 June 2020, published on 19 June 2020, the Friuli Venezia Giulia Regional Administrative Court partially upheld the appeal brought by Italgas Reti against the Council of Pordenone, to ascertain the company’s right of ownership of the portion of the network built up to 31 December 1985, returned free of charge at the expiry of the concession, and of the portion of the network laid within the housing development plans for which private individuals were granted deduction of the primary urbanisation costs until the actual expiry of assignment.

In particular, the Regional Administrative Court: (i) ascertained the Company’s right to retain ownership of the network returned free of charge upon the effective cessation of the concession currently under the prorogatio system pursuant to the law, cancelling the deeds whereby the Council had entered said assets as its own and, at the same time, (ii) ascertained the Council’s right to obtain ownership of the network developed by the Company under the scope of the housing development plans with deduction of the urbanisation costs. The Council has appealed to the Council of State asking that the ruling be overturned.

With reference to the dispute with the Council of Venice about the possible fee to be paid for the use of the assets constituting “Block A” following the hearing of 29 December 2020, we are currently awaiting a court ruling regarding to the preliminary proceedings.

Similar to the action taken by the Municipality of Venice following the rulings of the Council of State of 2 April 2019 on the confirmation of the free acquisition of the so-called “Block A”, the Municipality of Cavallino Treporti took legal action against Italgas Reti before the Court of Venice, for the verification and consequent payment of the fee for use of the portion of network subject to free acquisition. At the hearing of 17 December 2020, the judge adjourned the case until the hearing of 1 April 2021 for the admission of preliminary evidence.

26 For more details on the Authority provisions following the COVID-19 emergency, reference is made to the paragraph on “Coronavirus Emergency – main Authority provisions” on page 153.
27 For more information on the regulation concerning the assignments of Gas distribution serviceService of transporting natural gas through networks of local methane pipelines from one or more delivery points to redelivery points, generally at low pressure and in urban areas, for delivery to end users. and the related call for tenders, please see the specific paragraph in the chapter “Legislative and regulatory framework” on page 87.
28 The territorial presence where Italgas exercises control is shown in blue, the presence through affiliates over which it does not exercise control is shown in light green.
29 Further information is provided in Note 26 “Disputes and other measures” to the Notes to the Consolidated Financial Statements.